Here is some inspiration coming from successful women. In Afaemme we believe in empowering one another.

The first benefit of the seven we highlighted in “She decides you succeed” is the better quality of decision making in companies with gender diverse boards. It is a fact that gender diversity leads to a richer debate because different perspectives are taken into account.

Caro van Eekelen has been personally involved with increasing the diversity, both within and beyond her role at Accor Hotels.

In fact, she was nominated and finalist for the women at work award 2014 for her personal contribution and impact on diversity.

For her, diversity is very important because it gives very complementary teams that perform much better.

We are stronger as a group! Teamwork toward a common vision for the #success and empowerment of phenomenal women

Caro Van Eekelen will accompany us in the final conference on “She Decides, You Succeed” that will be have place in #Barcelona the 9th of June. An event where women take the floor.

– You can read more about her in our website: http://www.afaemme.org/…/ms-caro-van-eekelen-successful-sto…

– If you want to know more about the project watch the video by clicking on this link:
http://www.afaemme.org she decides you succeed documentation

Within the framework of the Egyptian state’s interest in developing and establishing small and medium enterprises to support the... 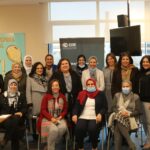