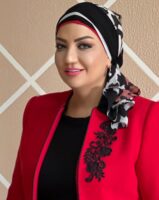 Reem Fawzy is the CEO of Rimo Tours and Pink Taxi, an Egyptian tourism company that she established in 2007. Reem was recently appointed as a member of the Board of Directors of Aerotel Company for Hotels, Tourism, Entertainment and Medical Services. Also, she is a former board member of the Egyptian Travel Agents Association (ETAA. In November 2020, she earned her DBA from Helwan University in Egypt and her MBA in 2017 from the Arab Academy for Banking and Financial Services. She is also a graduate of the Women Corporate Directors Certified Program as well as the Goldman Sachs 10,000 Women program from the American University in Cairo. She received a number of Egyptian and international recognition awards.

Reem started her career life as a Chief Accountant and then a General Manager of a mid-sized travel agency. In 2000, Reem made a life-changing decision, where she quit her job and decided to pursue her entrepreneurial dream by renting and running a travel agency. In 2005, she launched the first taxi company in Egypt; the Cairo Cab. And in 2007, she decided to launch Rimo for Transportation and Limousine Services; a travel and transportation company. Then, she decided to expand her company to Rimo Tours, an Egyptian travel agency that offers a wide range of services including limo rental, hotel reservation, event organization, sightseeing tours and religious tourism. During the most difficult period in the history of Egypt in 2011, not only was she able to sustain her business, but also she succeeded in doubling its size. She adjusted and improvedher business goals in a way that enabled her to best use her resources and maximize her revenue.

After her participation in the Goldman Sachs 10,000 Women Program, she became even more passionate about community involvement and women empowerment and established the Pink Taxi. It is the first Egyptian taxi service offered to women by women. The aim of this project is to provide a safe and harassment free means of transportation for women in Egypt and provide a training and employment opportunity for women to become drivers. Furthermore, 10% of the returns from Pink Taxi are donated to the Baheya Foundation (An Egyptian Foundation that offers free treatment for breast cancer patients).

Over the years, Reem was recognized by a number of prominent international organizations. She accepted the Maverick in Leadership Award of the Yale Chief Executive Leadership Institute on December 2019, at a ceremony at the 100th Yale CEO Summit in New York City. In January of the same year, Reem was nominated to participate in the Davos 2019 World Economic Forum in Switzerland, where she was recognized for her leading role in the tourism sector in Egypt in addition to supporting women employment and empowerment. She was also selected to represent the Goldman Sachs 10,000 Women Program during the Women’s Leadership in the Economy Forum that was held by the Bush Institute and hosted by Mrs. Laura Bush in Texas in 2018.  Furthermore, Reem was selected as one of the prominent graduates of the 10,000 Women Program to participate in the Clinton Global Initiative’s annual meeting that was held in New York City in 2013. She was a panel member, where she shared her success story and how her experience at the 10,000 Women Program enriched her business knowledge and practical experience. Moreover, she was hosted in a number of television and radio interviews to share her entrepreneurial story and her latest Pink Taxi initiative.